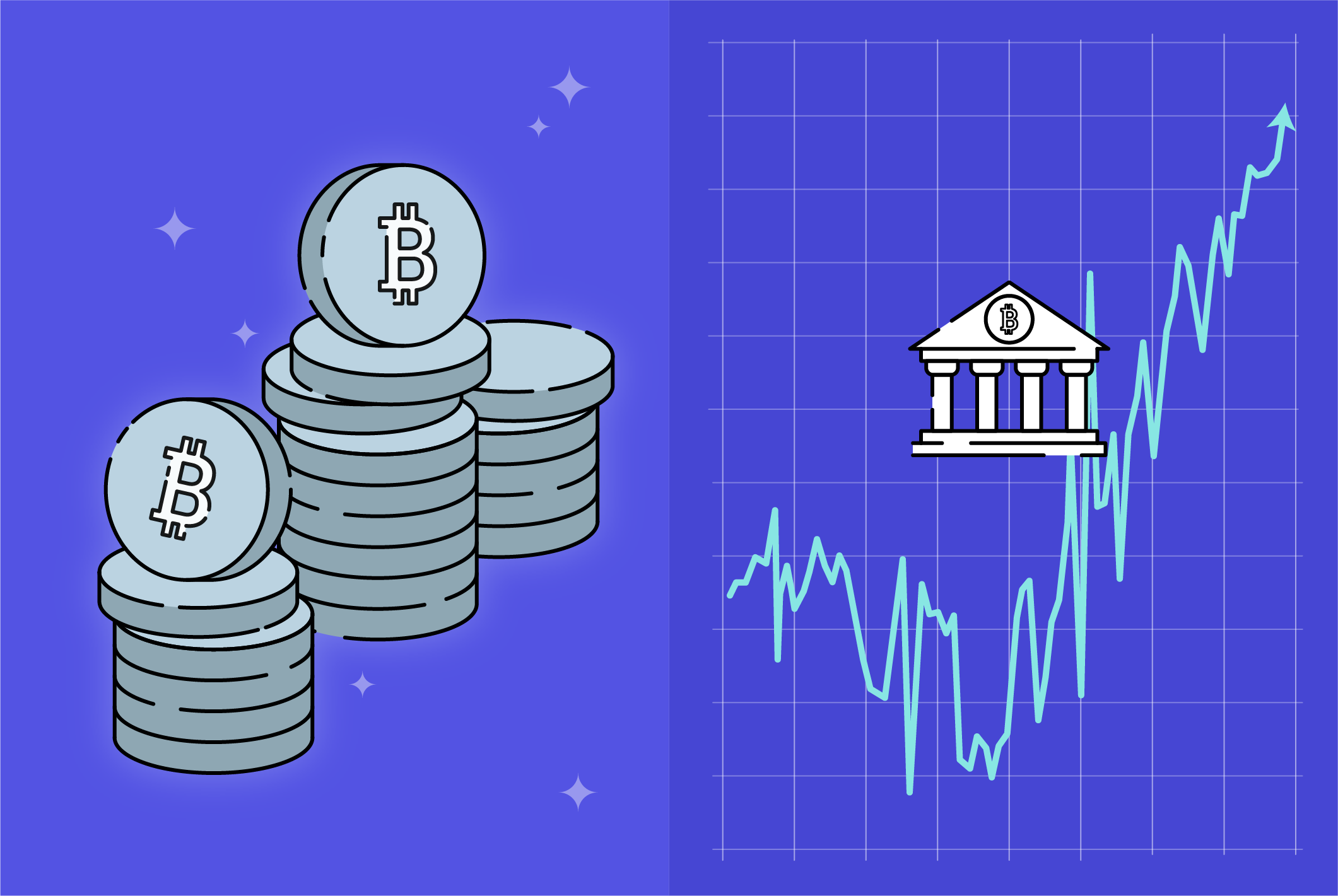 A decade ago, conventional wisdom dismissed cryptocurrency as a frivolous investment.

But that’s no longer the case. Since Bitcoin has been on such a massive upward trajectory over the last few years, big-name banks took notice and are now moving to deal in crypto, embracing it as a legitimate currency that only stands to become more widespread.

That said, it’s understandable if you’re wary of buying and trading crypto directly. It’s as volatile as assets come, prone to constant, steep price fluctuations that are tough to predict.

But there’s one prospect gaining traction that would allow you to invest in crypto without owning any digital currency outright. Meet the Bitcoin exchange-traded fund (ETF).

In fact, just this past October, the very first Bitcoin-related ETF in the U.S., which tracks Bitcoin futures, launched on the New York Stock Exchange. Shortly after, Bitcoin’s value cracked a new record-high, north of $66,000.

So why all the commotion? Read on for an explainer for how Bitcoin ETFs work, and whether they can become a part of viable investment strategies moving forward.

What is a Bitcoin ETF?

First off, an exchange-traded fund is a type of security that tracks the value of an underlying asset or group of assets. Like a stock, it’s bought and sold on an exchange marketplace. Unlike a stock, an ETF allows you to invest in multiple assets at once, without actually owning them.

ETFs can be made up of assets that span industries. The most well-known ETF is the SPDR S&P 500 trust (trading under the ticker symbol SPY), which tracks the performance of 500 of the country’s most influential companies, including Apple, Microsoft, and Amazon.

But there are also plenty of smaller niche ETFs that focus on a singular sector. Some specialize in biotech, for instance, while others dial in on energy.

Hence the push for Bitcoin ETFs. These would track the price of Bitcoin, the most popular cryptocurrency, and their value would fluctuate ( i.e., dip if the coin dipped, rise if the coin rose) accordingly.

4 Benefits of a Bitcoin ETF

Now, you may be wondering: if a Bitcoin ETF just copies the price of Bitcoin, why not trade it (or another type of crypto) directly? Turns out, there are several good reasons.

If you believe in the investment potential of Bitcoin, but don’t want to get too in the weeds on how investing in cryptocurrency works, banking on a Bitcoin ETF could be a great option. You wouldn’t need to know the intricacies behind blockchain technology, or even need to join a crypto exchange, since a Bitcoin ETF could be traded in a more traditional marketplace.

You also wouldn’t need to worry about storing actual Bitcoin in a digital wallet, which can be both a hassle (since there are so many options) and dicey (since you can lose all your crypto if you forget the password associated with your wallet).

As mentioned, an ETF can be made up of multiple underlying assets — sometimes even thousands. This makes it easier for investors to diversify their holdings, since they can trade in bunches rather than making countless individual transactions.

But this also means that a Bitcoin ETF could group Bitcoin together with other kinds of assets — a potentially helpful hedge against crypto’s volatility.

This also provides the opportunity to group cryptocurrencies together. An investment fund in Canada, for instance, recently launched an ETF that pools together Bitcoin and Ethereum. It’s now traded on the Toronto Stock Exchange.

A Bitcoin ETF would be divided up into individual shares, which investors could publicly trade just like stocks. With that comes the opportunity to bet against Bitcoin, or short-sell shares of the Bitcoin ETF if you think the value of the crypto it’s mimicking is destined to plummet.

Even though Bitcoin is getting increasingly popular, it’s still a new asset class. Crypto’s future is uncertain, and the mainstream investment community understands ETFs — many of which have a proven track record of working well — way better than any kind of cryptocurrency. A Bitcoin ETF allows experienced investors to trade in a security they’re more comfortable with.

Disadvantages of a Bitcoin ETF

There are still plenty of unknowns surrounding Bitcoin ETFs. And they’d likely come with some downsides.

Convenience almost always comes with an associated cost, and ETFs typically charge management fees, which sometimes grow higher the more shares you own. A Bitcoin ETF would also likely charge storage fees for its underlying crypto.

Some traditional ETFs represent equity shares and are made up of public companies. If you have any shares of an ETF that includes one of those companies, you get dividends whenever its regular shareholders get them — albeit a smaller amount.

Since Bitcoin is decentralized, meaning it operates outside the control of any single authority, a Bitcoin ETF likely wouldn’t yield any dividends.

Harder to Diversify Your Crypto Assets

A Bitcoin ETF would help diversify your overall portfolio. But if it only dealt in Bitcoin, it wouldn’t allow you to invest in multiple types of cryptocurrency, which has its perks. Because owning different kinds of crypto leaves you less exposed to the volatility of any one particular coin. It also bolsters your chance of picking an outperforming crypto. Because even though Bitcoin is the biggest, sometimes its competitors, like Ethereum, fare better.

You Wouldn’t Own Any Bitcoin

As mentioned, a Bitcoin ETF allows you to invest in crypto without owning it. But there are perks to owning Bitcoin and other crypto! It’s a reliable store of value, less prone to inflation than fiat currency and easy to swap for cash at low exchange rates.

You’d also typically need to go through a broker to buy shares of an ETF, whereas with crypto, once you register on an exchange, you can buy and sell on your own schedule.

The biggest, most glaring downside to the Bitcoin ETF: it doesn’t even exist in the U.S. yet.

But in the U.S., different investors have tried launching their own version since 2013, with at least 15 companies — including VanEck, Grayscale, and Valkyrie — submitting Bitcoin ETF filings. But the U.S. Securities and Exchange Commission has repeatedly denied them. Regulators have worried about crypto’s thin liquidity compared to U.S. dollars. They’ve also argued that since crypto is traded on unregulated exchanges, it’s prone to fraud and market manipulation.

And since there’s a hard cap on the total amount of Bitcoin available, regulators are also concerned that those who own the most coins will be able to dictate the market.

But the tides may finally be turning. ProShares launched its Bitcoin Strategy ETF in October — which tracks Bitcoin’s value through futures contracts. This means that instead of being tied to the current price of the digital token, the ETFs are linked to agreements to buy or sell the asset at a later time. Since crypto is so volatile, the futures prices may be drastically different from Bitcoin’s spot value.

And since the trading fees for a futures ETF are higher than they are on a crypto exchange, some financial advisors recommend to opt for buying Bitcoin directly if you want crypto exposure. Especially since the nuances behind futures ETFs are complicated for average retail investors to understand.

You can also consider giving money to publicly traded investment funds that own crypto. The Grayscale Bitcoin Trust, for example, deals in digital currency and recently announced that it’s looking to convert to a Bitcoin spot ETF.

Because there’s still a good chance an ETF that deals in Bitcoin itself launches sometime soon. Many institutional investors think SEC approval isn’t a matter of if, but when. When Robinhood and Paypal embraced crypto, it became easier to trade. And Bitcoin enthusiasts were buoyed when Gary Gensler became the new SEC chairman, since he’s studied and taught classes on crypto.

But, alas, only time will tell. If a physical Bitcoin ETF ever does launch on Wall Street, it would solidify crypto’s place as a legitimate, respected asset class.

By that point, it’d be mighty important to know how your crypto position stacks up against the rest of your holdings.

Tracking ETFs, Crypto, and All Your Other Investments

The prospects of Bitcoin ETFs look more promising than ever. But for now, the two asset classes exist separately. That’s a problem when you’re looking to get a holistic glimpse of your entire investment portfolio.

Because most portfolio trackers don’t give the full picture. Some traditional tools are good at monitoring conventional stocks alongside mutual funds and ETFs, but most of those aren’t compatible with Bitcoin or any other types of crypto.

And since most crypto trackers don’t account for traditional investments, it’s hard to gauge how much your entire portfolio is worth.

There’s really only one tool that seamlessly gathers every type of asset imaginable together in one place.

Kubera: The Portfolio Tracker that Does it All

Kubera has every tool you need to ensure none of your investments slip through the cracks. The web-based app is powered by custom-made architecture that connects with banks, stock brokerages, crypto exchanges, and other financial institutions across the globe.

The result: a live dashboard that funnels every investment in your portfolio into one place. See how traditional investments in stocks and real estate holdings are performing alongside all of your ETFs and crypto investments. You can throw any other asset you own into the mix, too  — web domains, collectibles, you name it.

Kubera supports tens of popular exchanges — including Coinbase, Binance, and Kraken. It also tracks digital wallets for Bitcoin, Ethereum, and other digital assets and can even connect to some cold wallets.

Kubera is as easy to use as a spreadsheet — only smarter. You can add rows of crypto holdings as you buy them, pooling them all onto a single dashboard.

But you don’t need to update anything yourself. After connecting the platform to your online bank, crypto, and other investment accounts; your holdings will update automatically, in sync with your transactions. And, crypto values and exchange rates are updated in real-time.

Its sleek interface and data analysis features give you a best-in-class snapshot of your overall asset performance, total net worth, and every other question you have about your current finances. Since it’s compatible with EstiBot, Zillow, and other leading asset experts — you can even get real-time value estimates of your home and car.

‍
For now, conventional ETFs and cryptocurrency investments are siloed. If you want to deal in both, you want a portfolio tracker that monitors them in the same place — along with every other asset you own.

Sign up for Kubera and get a single tool to track your crypto along with all other investments.

Or, if you work with a financial professional, share Kubera’s customizable white-label solution with them.